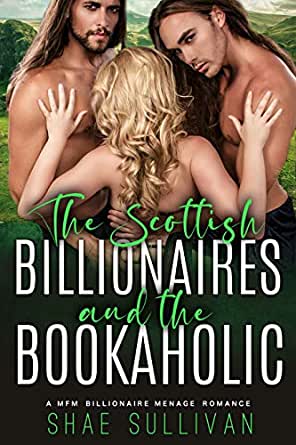 One year and two months.
That’s exactly how long my marriage lasted.

I thought I’d found my happily-ever-after—but I was so wrong—because my prince charming turned out to be a royal *sshole.

But I should have seen it . . . I mean, the signs were there. He never liked anything I did. In fact, my husband always hated the books I loved. He called me foolish, a daydreamer, living in a fantasy world.
But I’m none of those things—I’m just a bookaholic.

I spend my days marketing for work and my nights stalking my favorite authors. My house is full of books and bookswag, and I wouldn’t have it any other way.
When I win a contest to attend a bookcon in Scotland featuring my favorite author, I expect plenty of fun and adventures to distract me from the sh*t that my life has become; but what I never imagined . . . was meeting them.

Two Scottish billionaires who look like they walked right out of a Highlander Romance novel and into real life. Tall, brawny, with a sensual mischievous hint in their eyes; and the way they are looking at me has my insides hot, warm, and twisting in anticipation.

But getting involved with your favorite author’s brother and best friend is a bad idea . . . right?

I was thrilled to read The Scottish Billionaires and the Bookaholic after reading the exciting premise. Unfortunately, I was a bit let down.

Not Daddy’s Girl let down, but enough to make me go, “Huh? That’s it?” Let me explain.

Our protagonist Ash has been with her husband a little over a year before they divorced for irreconcilable differences. When you read this book, you’ll find out how discouraging he is.

Ash wins a trip to Scotland to a book convention and meet her all-time favorite author. How cool is that?

Plus, Ash is an aspiring writer so she plans to use the trip as an opportunity to get her rolling with her untouched manuscript. The whole plan sounds fun in my book.

As Ash prepares for the trip of her lifetime, she doesn’t know the adventure comes with two extra perks in the forms of two hot Scotsmen brothers.

Meet Scotland’s Most Eligible Billionaire Bachelors (they live in castle!)

Billionaires Gavin and Sean let their writer sister Paisley host the annual book convention at their castle. One rule: the brothers aren’t allowed to flirt with any of the con guests. The brothers stew up a plan to choose the book con winner they find the most attractive. They don’t want Ash or Paisley to know the truth, but it always finds a way for slipping out.

Meanwhile, Ash is loving the idea of having two sexy Scots in her life. It was something spicier than her short-lived marriage has ever been. Too bad the con only lasts a week…or does it have to?

Turn-Ons and Turn-Offs from This Book

As a bookaholic myself, I was excited for Ash to go on this book con. How many times do you have a chance to go to a book convention in a castle overseas? Plus, the fact she’s a writer too is a bonus.

I love romance and erotica set in foreign destinations, especially in Europe. I haven’t been to Scotland yet, but it’s on my list.

One problem I had with The Scottish Billionaires is the sexual tension. I wished Sullivan took more time with it. It took off like a bomb detonated too early. I get it, the book is meant to be a short MFM, but it would’ve been better for me if the tension stayed in the oven a little longer (if you catch my drift).

Ash had this huge dilemma of whether to stay in Scotland or return to America. She didn’t have to make a drastic decision so soon (LOL). She can always return to Scotland. Plus, she has two billionaires beaus. They can fly to her in their private jets whenever they want.

Plus, the whole subplot with Gavin and Sean’s weird ex appeared out of nowhere from the middle of the book. I was like, “Who the heck are you?”

The book lost me a little with this last-minute character. It was so out of the blue, it made me laugh. The ex tried to win the brothers coming into their castle wearing nothing but a trench coat. Can you say desperation?

You may enjoy The Scottish Billionaires if you don’t mind instalove. I totally approached the book unprepared for it.

I’m going to say this a million times, but I wished there was more sexual tension before Ash and the billionaire Scots let it loose in this book. However, I did appreciate the scene when the brothers gave Ash a tour of a popular lake where the famous Loch Ness supposedly haunted. It was sweet.

Shae Sullivan created a sexy story with a promising premise. Too bad the delivery fell short. It’s a definite read for instalove readers.

Going to a book convention abroad and hooking up with two hot European billionaires is somebody’s wildest dreams. Hey, it might be yours.

Would I read more from Sullivan? Of course. I’d hate to dismiss an author after reading only one of their books (unless they were truly awful).

I’m looking forward to the Australian one. I’ve been obsessed with Australia lately anyway. Maybe I’ll have a better experience reading Sullivan’s Australia book than I did with this one.