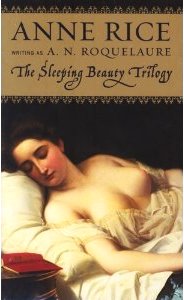 In the traditional folktale of "Sleeping Beauty," the spell cast upon the lovely young princess and everyone in her castle can only be broken by the kiss of a Prince. It is an ancient story, one that originally emerged from and still deeply disturbs the mind's unconscious. In the first book of the series, Anne Rice (author of Beauty's Kingdom), writing as A.N. Roquelaure, retells the Beauty story and probes the unspoken implications of this lush, suggestive tale by exploring its undeniable connection to sexual desire. Here the Prince awakens Beauty, not with a kiss, but with sexual initiation. His reward for ending the hundred years of enchantment is Beauty's complete and total enslavement to him . . . as Anne Rice explores the world of erotic yearning and fantasy in a classic that becomes, with her skillful pen, a compelling experience...

Since I heard Anne Rice released Beauty’s Kingdom, I’ve decided to take the time to re-read the original Sleeping Beauty trilogy. Apparently, I wasn’t paying attention when I read this series the first time. Somehow, I managed to breeze through the books without flinching.

Anne Rice’s The Claiming of Sleeping Beauty is more disturbing than sexy. You have rape and unnecessary sexual torture involving teenagers.

The Claiming of Sleeping Beauty begins with the Prince waking up Beauty. Does Beauty wake up with a kiss? Nope, the Prince simply takes advantage of her while she’s sleeping. That’s something you don’t want to wake up to after a long nap.

Apparently, the Prince can treat Beauty the way he does because of his powerful mother, Queen Eleanor. He has Beauty walking around naked in her very kingdom. Her parents only stand by barely speaking up about it.

To maintain peaceful relations with the all so powerful Queen, neighboring kingdoms ship their princes and princesses to the Queen’s kingdom for a few years for special training. Basically, they’re sex slaves.

One note about the exchange: they can’t be permanently injured. Sure, the slaves can be spanked a million times, but nothing beyond that.

The entire story is one heck of a rollercoaster. Not the good kind though.

HOW OLD ARE YOU?

Beauty is 15. Basically, an underage girl wakes up being raped and is unwillingly sent away as a sex slave to learn “discipline.”

“He was only three years older than she had been. Eighteen, newly a man, but afraid of nothing and no one.”

I have no problem with women having relations with older men. However, this is an older man taking advantage over a young lady.

The Claiming of Sleeping Beauty would’ve been more comforting if Beauty was 18 at least. Plus, she had consensual sex with the Prince. I can deal with the S&M appeal of this novel but not when teenagers are forced into the act.

Do I even want to continue with the rest of the trilogy to reach Beauty’s Kingdom? I don’t know. I’ll keep the series in a corner for now.