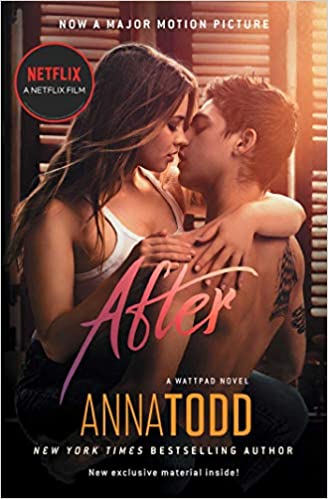 Tessa is a good girl with a sweet, reliable boyfriend back home. She’s got direction, ambition, and a mother who’s intent on keeping her that way.

But she’s barely moved into her freshman dorm when she runs into Hardin. With his tousled brown hair, cocky British accent, and tattoos, Hardin is cute and different from what she’s used to.

But he’s also rude—to the point of cruelty, even. For all his attitude, Tessa should hate Hardin. And she does—until she finds herself alone with him in his room. Something about his dark mood grabs her, and when they kiss it ignites within her a passion she’s never known before

He'll call her beautiful, then insist he isn’t the one for her and disappear again and again. Despite the reckless way he treats her, Tessa is compelled to dig deeper and find the real Hardin beneath all his lies. He pushes her away again and again, yet every time she pushes back, he only pulls her in deeper

Tessa already has the perfect boyfriend. So why is she trying so hard to overcome her own hurt pride and Hardin's prejudice about nice girls like her?

Reading After was like witnessing a train ramming into highway traffic, then an airplane lands on the entire mess. Let me explain:

After: The Story of a Good Girl and a Bad Boy

Anna Todd’s After begins with the sweet, naïve Tessa, starting her freshman year in college. She has a steady boyfriend named Noah and an overprotective mother.

Tessa’s life transforms when she meets Hardin in her dorm, chilling like he owns it. He’s friends with Steph, Tessa’s roommate. Apparently, he comes to the room whenever he wants (red flag right there).

Since Tessa’s first meeting with Hardin, everything goes down from there. She fools around with Hardin even though she’s technically still with Noah. Todd doesn’t describe how Tessa and Noah started dating, but it has been mentioned the two have known each other since they were ten years old.

“I am horrible for cheating on Noah, but I am just confused, and I tried to stay away from Hardin. I really did.”

Throughout the entire book, Tessa and Hardin fight and make up. Hardin’s anger is so out-of-the-blue, and all Tessa has to say:

“Hardin loves me. In his own damaged way, he does love me. The realization of this hits me like a truck.”

Don’t read After if you’ve been in a toxic relationship. Hardin is manipulative as all get out. During one of his arguments with Tessa, he says:

“I don’t dislike you, Tessa. You just made yourself an easy target—it’s all about the chase, right?”

But wait, there’s more! Hardin deletes Noah’s texts on Tessa’s phone, and he gets angry whenever any guys breathe in her direction. Heavens forbid Tessa asks Hardin any questions, or he’ll get into a hissy fit.

Tessa and Hardin have been together for three months then decide to move in together. The happy ending doesn’t end there; there’s only more drama.

Does any good come out of this book? I’m giving you a big, honest NO.

Would I Recommend After?

You deserve better. Save your time and read something that’ll make you smile.

Fun note: Todd’s story was based on a One Direction fanfic she created on Wattpad. It’s cool she managed to gain such a following from writing fanfiction, but good grief. Glorifying toxic relationships is not the way to go!

Another bigfoot erotica might relieve me from the reading I’ve endured.

Need more reviews? I got you: