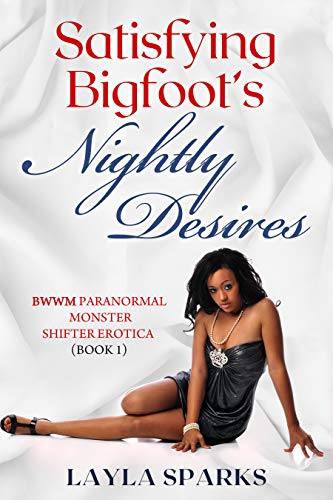 “How old are you?” I breathed, as his hand squeezed my thigh and moved higher.

“You don’t want to know,” he said huskily, bringing his lips behind my ear.

He kissed the nape of my neck, his warm breath in my hair. He grabbed my waist and pulled me closer to him as he kissed my neck softly. My head fell to the side to give him more access as he kissed and nibbled his way towards my mouth.

My skin burned and shivered throughout the trail of his kisses.

A barista works her regular, tedious job at a coffee shop every day until her life is turned upside down when a hot stranger becomes a regular customer. Sandra knows he wants more than just coffee, judging by his longing gaze. Not before long, she finds out a shocking secret about him, and the truth terrifies her. -Amazon

I read Satisfying Bigfoot’s Nightly Desires last year during mandatory quarantine. I looked at Layla Sparks’ book and thought, “What the heck is going on here?” I had to read it!  Finding anything bigfoot related in the romance/erotica realm is like finding a needle in the haystack. It’s fascinating to me since I’m a big paranormal junkie anyway.

I read through Satisfying Bigfoot and never thought of it again. I thought the story was alright, nothing extraordinary. After reading several similar bigfoot titles, I realized this was one of the better stories I’ve found so far. Sparks has written a bigfoot story with an actual plot, not another one-shot bigfoot short.

Sandra has no time for dating. She’s a small-town barista studying to be a full-time nurse. Sandra’s not the wealthiest person in the world, but she’s making it through every day. Her life changes when Evan steps in. Evan’s always catching her eye at the coffee shop. When Sandra finally goes out with Evan, she’s in for a big surprise.

Evan has a big secret: he’s a bigfoot shapeshifter. The problem: he unwillingly changes into his bigfoot form at sunset. One way he can change back to normal is through sex. That’s not all; his bigfoot ex is on the loose. She needs to be found before the rest of town finds out about bigfeet’s existence.

Sandra has no problem helping Evan find his ex. The thing is, once the ex finds out Sandra’s officially dating Evan, she wants to kill her. How can Sandra maintain a steady relationship with Evan despite all the bigfoot madness?

Satisfying Bigfoot reads like a spicy soap opera. There are plenty of surprises (and sex) to keep you entertained. You won’t be disappointed! The story also has plenty of interesting facts about the bigfeet in this world. According to Evan, the shapeshifters live longer than regular humans. They’re everywhere but hidden.

Before I began reading Satisfying Bigfoot, I was expecting Sandra to hook up with a full-blooded bigfoot. It’s not the case here. You don’t find tons of bigfoot shapeshifters stories. At least, I don’t. Most of them are filled with bears, wolves, and dragons.

I had a few questions: Did Evan really love Sandra, or he only needed her to sate his bigfoot appetite? At first, I was hesitant to read the book further unless he really cared about her. Fortunately, he proved his love through and through.

Next comes Alondra, Evan’s bigfoot ex. Sparks has written her as your typical, crazy ex. I didn’t really understand why Alondra was obsessed with killing Sandra besides Evan’s dating her. Were bigfoot shifters and full-blooded humans not allowed to be together? Did Evan hurt Alondra in the past, and she wanted revenge? You’ll never know.

There are five books total in the Satisfying Bigfoot series:

I’ve read them all! It gets better and more dramatic with each volume. Reading the books reminded me of True Blood, except if there were bigfoot shifters in the picture.

I admit there are a few plot holes in the series. You’ll question some characters’ purposes if they were relevant.

Should You Read Satisfying Bigfoot?

Overall, I enjoyed Satisfying Bigfoot’s Nightly Desires and the rest of the series. I couldn’t put it down. Each volume was relatively short. Give yourself at least an hour to read them, and you’ll be done.

Layla Sparks is a sparkling reminder that more bigfoot stories in the romance/erotica genre needed to be written.